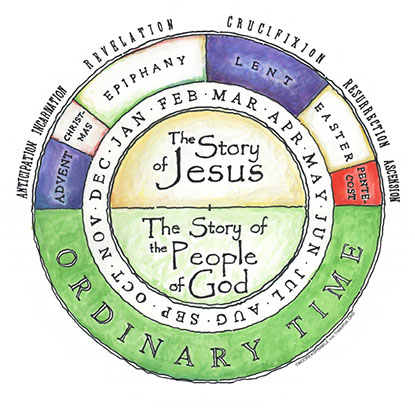 A Sermon for the Feast of St. Mark

Today the Church remembers St. Mark, according to tradition, the author of the second Gospel—although fairly widely agreed to be the earliest of the four.  Mark travelled with Peter for two or three years as he made his way through Asia Minor and eventually to Rome.  The early Church historian Eusebius says that along the way Mark recorded Peter’s sermons and that these became the basis for his Gospel.  And yet, today, the Scripture passages we read say nothing of St. Mark.  Instead they continue the Easter theme of life in the risen Jesus.  It makes sense.  Mark wouldn’t have wanted us to focus on him today; he’d have wanted us to keep our attention on Jesus—which is why he wrote his Gospel.  And so, in our Epistle, St. Paul urges us to grow into maturity in Christ.  In our Gospel today, Jesus urges his disciples to abide in him.  The weather today isn’t great, so I’ll try to keep thing short and focus on just today’s Gospel.

To make his point, Jesus draws on the imagery of God’s people as a vine.  He says:

“I am the true vine, and my Father is the vinedresser. Every branch in me that does not bear fruit he takes away, and every branch that does bear fruit he prunes, that it may bear more fruit. Already you are clean because of the word that I have spoken to you. Abide in me, and I in you. As the branch cannot bear fruit by itself, unless it abides in the vine, neither can you, unless you abide in me. I am the vine; you are the branches. Whoever abides in me and I in him, he it is that bears much fruit, for apart from me you can do nothing. If anyone does not abide in me he is thrown away like a branch and withers; and the branches are gathered, thrown into the fire, and burned. If you abide in me, and my words abide in you, ask whatever you wish, and it will be done for you. By this my Father is glorified, that you bear much fruit and so prove to be my disciples. As the Father has loved me, so have I loved you. Abide in my love. If you keep my commandments, you will abide in my love, just as I have kept my Father’s commandments and abide in his love. These things I have spoken to you, that my joy may be in you, and that your joy may be full.

This imagery of the vine and the vinedresser was well-established in the Old Testament.  Israel is the vine.  The Lord is the vinedresser.  Psalm 80, for example, portrays Israel as a vine delivered from Egypt and planted in land cleared by the Lord.  While the vine flourished for a time, the wall that once protected it fell.  Passers-by plucked away the fruit, while boars and other animals ravaged it.  The psalmist pleads with the Lord to look on the vine and to restore Israel: “Give us life and we will call upon your name” (v. 18).  In other places, like Isaiah 5, Israel is condemned.  The Lord planted her and cultivated her, but despite his efforts, she grew only wild grapes.

In our Gospel Jesus draws on this imagery to make the point that he is the new Israel and that membership in the people of God is based not on ethnicity or the marks of distinction created by the law, but by abiding in him.  Jesus uses this image to warn of coming judgement: as he has always done, the Father will prune away dead wood from the living vine.  Already this work has begun.  Jesus uses the unusual verb kathairo to describe the Father’s pruning and contrasts it with the “cleanness”—katharos—of the disciples.  They are part of those who have already submitted themselves to the vinedresser and been pruned.  They have heard the word of Jesus and believed with the result that they are bearing fruit, although this does not mean that more pruning will not be necessary.  It’s an ongoing process.

The key here is abiding in Jesus.  He is the solution to Israel’s problem, the age-old failure to bear fruit.  In verses 8-11 Jesus moves from fruit, to love, to obedience, to joy.  If fruit is the evidence of abiding in Jesus, we must know what it looks like.  To abide in Jesus is an act of love in return for the love he has already shown.  As the Father loves him, Jesus also loves us.  We see this in the humility of his incarnation, but supremely in his death on the cross.  We love him because he first loved us.  Next we see the relationship between love and obedience.  To love Jesus is to keep his commandments and lest this seem harsh, Jesus compares it to the way in which he abides in his Father’s love by keeping his commandments.  The commandments of Jesus are good, the law of the Spirit gives life and we ought to submit to it in happy gratitude.  Finally, Jesus explains that it is through this abiding in love manifested in obedience that we will know joy.

I want to close with a modern-day—or close to modern-day—illustration about vines and branches.  In the early 1860s a certain species of aphids made its way from the New Word to Europe.  These little aphids fed on the roots of grape vines.  New Word stock had evolved resistance to these pests, but the vines of Europe had not and the aphids began to quickly kill them off.  The damage was enormous.  It cost the French economy something in the neighbourhood of 10 billion francs.  Grape-growers tried everything, from chemicals to letting their chickens run through the vineyards to eat the aphids, some even placing frogs at the base of each vine.  Nothing worked and the blight spread.  But they did find a solution.  Cuttings of a grape variety native to Texas, resistant to the aphids and accustomed to the same sort of soils found in France, were planted and the French vines grafted onto this New Word root stock.  The vines began to thrive again, receiving new life when grafted into those new roots.  It is, I think, a remarkable image of abiding in Jesus.  Sin has struck at our roots and because of that we die.  There’s nothing we can do to fix it.  Even in Israel, the law was powerless to address the root of the problem and to restore life.  And so the vineyard was pruned and from it the Lord raised up a new vine in Jesus.  Sin and death did their worst to him—kind of like those aphids had done their worst to that Texas stock—and he came out the other side alive.  Sin and death have no hold over him.  And as the Spirit grafts us into this new vine that is Jesus, Brothers and Sisters, his life restores us and makes us new.  It is the only solution.  It is the only source of life.  It is the only means to know triumph over sin.  Friends, abide in Jesus.  Hold closely to him.  Remember your baptism.  Come to his Table.  And steep yourself in his word that you might know and be transformed by the good news.

Let’s pray: Almighty God, who through the heavenly teaching of Saint Mark the evangelist instructed your Church; Give us grace that we may not be carried away with every wind of false teaching, but may be established in the truth of your holy  Gospel, through Jesus Christ our Lord, who lives and reigns with you and the Holy Spirit, one God, now and for ever. Amen.